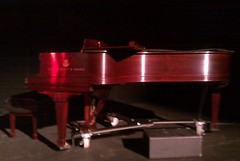 Larry Wines—  Longtime journalist, with awards for print, publishing, and broadcasting. Creator and host of radio’s award-winning “Tied to the Tracks,” which has featured many amazing musicians; over 300 guests, so far, including Grammy and Juno winners and nominees, Just printed this on his blog about my win at Park City!

It’s a Gold Medal of Excellence win for “INVISIBLE,” that is, for the film-score Marc Bosserman just brought home from the Park City Film Music Festival for his work on the project. A well-know Southern Cal music scene figure who plays in a variety of well-crafted and accessible styles, Marc wrote to tell the Guide, “It is a one of a kind film music festival. I was honored to be able to participate and most honored to get an award for the score I did. The film music basically was submitted by the film’s amazing producer Chrystina and director Lincoln. shown to rave reviews and won this gold medal.”
Marc adds, “It was a total labor of love to create . Lincoln spent hours on each minute of the film.” They played it “over and over to make sure that each note totally matched and added the exact right feel to the impact of the film. It was quite a challenge with music from diverse areas.”
That diversity included, says Marc, “Trent Reznor-type rock and coctail piano and sort of neo classical, as well as tracks that used sounds by themselves as soundtrack music. I used a lot of new sounds that I had just gotten in instruments created by a company called Native Instruments. All of it was created In my home studio.”
Marc remains excited about the collaboration of creative energy: “Lincoln was a treat to work with and my very good friend Rex Perry did all the mixing and mastering. I love the studio and the creative precess more than practically anything. The rest of the time, when I’m not doing humanitarian work 40 hours a week, I am gigging all over L.A. or producing demos and tracks for songwriters or working on my own creations. I love helping.”
You can keep up with Marc and his many L.A. area gigs at www.marcbosserman.com.

Cool it is! Thanks Larry!