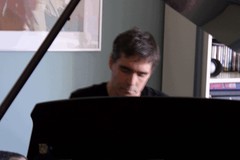 I found these Recommendations on LinkedIn and thought that they were pretty cool, so, I’m posting them! : )

“Marc is a talented musician who can both be a leader and a group member taking directions depending on the situation. He’s a pleasure to work with and his experience and personality is a plus in any situation.

“Marc is an excellent keyboard player and singer. He always brings enthusiasm and spirit of play to the gig. I have worked with Marc on other occasions and know that he has a large repertoire of material that he performs.

I highly recommend Marc as an excellent musician.” September 1, 2007

“Marc is a fantastic pianist/keyboardist AND a gifted vocalist. His talent for blending is incredible, both with voice and piano (his strongest playing is on piano). He’s also a talented songwriter and lot of fun to have around. Basically, he’s about as much of an asset as you can get in a band member.

“Marc has written and co-written some first-rate songs. He puts a beautiful quality into his work that comes from his own awesome universe. Think Elton John or Marc Cohn crossed with Bruce Hornsby, with a touch of Dan Fogelberg and a sprinkling of Michael Franks.” August 13, 2007

“Marc played at a friend’s birthday party – his playing was truly aesthetic, and so much fun! It really made the party lovely and complete. Very highly recommended!” March 17, 2011

1st Kat Martell,
hired Marc as a Entertainer in 2011

“Mark loves his music, which is apparent when he performs, and it enhances the performance. His songs can be engaging and enthralling. Plus he has a nice voice!! It is always a pleasure to hear him sing.” April 1, 2008

hired Marc as a Pianist/Vocalist in 1998, and hired Marc more than once

“Marc is an excellent piano/keyboard player. Whether it’s jazz or pop, he’s got a great feel. He’s so creative and tasteful. I could listen to him play all day. He’s also a wonderful entertainer with an appealing voice. He sings and plays with a lot of heart, and his music lifts the spirit. He’s got a lot of charisma and loves people. Marc’s awesome!!”August 14, 2007